Focus on the Faith: The Adoration of the Magi

Joseph and the Most Holy Mother of God with the Infant Jesus were still in Bethlehem when Magi came to Jerusalem from a distant land to the east (Persia or Babylon). Learned men, engaged in observing and studying the stars, were called Magi or wise men. At that time, men believed that, at the birth of a great man, a new star appears in the sky. Many pagans within the confines of Persia, had learned from the dispersed Jews of the coming of the Messiah, the Great King of Israel. From the Jews, they could even have learned the following prophecy of Balaam relating to the Messiah: I shall see him, but not now: I shall behold him, but not nigh: there shall come a Star out of Jacob, and a Sceptre shall rise out of Israel, and shall smite the corners of Moab (Num. 24:17). (“Moab” is understood here as a personification of the enemies of the Messiah.) The Persian Magi thus expected that, when the promised King would be born, a new star would appear in the sky. The prophecy of Balaam spoke of a star in the spiritual sense; nevertheless, the Lord, in His mercy, to bring the pagans to faith, gave a sign in the sky in the form of the appearance of an extraordinary star. Having seen it, the Magi understood that the expected King had been born.

After a protracted and long journey, they finally reached Jerusalem, the capital of the Jewish kingdom, and began to ask: Where is he that is born King of the Jews? For we have seen his star in the east, and are come to worship him. These words from such conspicuous strangers, stirred up many of the inhabitants of Jerusalem, including King Herod, to whom the arrival of the exotic eastern scholars was immediately reported.

From the first days of his accession, Herod’s throne had been shaky. The people hated him as a usurper of the Davidic throne and a tyrant. The last years of Herod’s life were complicated still more by personal adversities and bloody reprisals. He became extremely suspicious, and for the least cause executed enemies both real and imagined. Thus perished several of Herod’s children and even his wife, whom earlier he had loved ardently. Sick and decrepit, Herod now resided in his new palace in Sion. Having heard of a King Who had been born, he became particularly agitated. Vulnerable in his old age, he feared that his rule would be overthrown and handed over to the new-born King.

In order to clear up just who this new pretender to the throne was, Herod gathered all the priests and scribes – men that knew the books of Sacred Scripture well – and he inquired of them where Christ should be born. They answered: In Bethlehem of Judæa: for thus it is written by the prophet Micah. Then Herod privately summoned the Magi, found out from them the time of the appearance of the star, and sent them on to Bethlehem. Feigning piety, the cunning Herod said to them: “Go and search diligently for the young child; and when ye have found him, bring me word again, that I may come and worship him also.” In fact, Herod was going to use their report to put the Infant to death.

The Magi listened to King Herod without suspecting anything, and went to Bethlehem. There again that star appeared, which they had seen before in the east. Moving across the sky, it went before them, indicating the way. In Bethlehem, the star stopped over that spot where the Infant Jesus was, Who had been born.

The Magi went into the house and saw the Infant Jesus with His mother. They bowed down to the ground before Him and presented to Him their gifts: gold, frankincense and myrrh (a precious aromatic oil). In the gifts of the Magi, one may see the following symbolic significance. They brought gold to Him, as to a King (as tribute or taxes); frankincense, as to God (incense is used at divine services); and myrrh, as to a Man Who must die (the dead were anointed with oils mixed with aromatic myrrh).

Having worshipped the King awaited by all, the Magi would have returned to Jerusalem and to King Herod. However, an angel appeared to them in a dream, revealing Herod’s perfidious designs, and commanded them to return to their own country by another way, without passing through Jerusalem. Tradition has preserved the names of the Magi, who afterwards became Christians: Melchior, Gaspar and Balthasar.

Thus, the first to worship the Saviour Who had been born were shepherds, nature’s true children, who could open up before Him only the treasure of their hearts, full of simplicity, faith and humility. Significantly later came the Magi from the East, imbued with erudite wisdom, who laid down gold, frankincense and myrrh, together with reverent joy, before the Divine Infant. They had had to make a long journey to reach Judæa, and even from Jerusalem they were not immediately able to find the birthplace of the King of the Jews. Does this not indicate that both simplicity of heart and profound, conscientious erudition lead equally to Christ? But the first way is more direct, short and sure than the second. The shepherds were guided directly by angels, while the Magi were “taught” by an unreasoning star, and, through Herod, by the scribes and the Jewish elders. Not without difficulties and dangers did they attain their desired goal, and they did not hear the heavenly harmony that sounded over the earth – Glory to God in the highest, and on earth peace, good will among men.

AMONG THE ORTHODOX PEOPLE of Carpatho-Russia there is a wonderful tradition of having a “Holy Supper” on Christmas Eve, just before going to Church for the Vigil. While the menu and details of the meal may be different from family to family and region to region, the general idea is as follows:

On Christmas Eve, the morning Vesperal Liturgy is celebrated. We keep a strict fast (no food or liquids) before this service and until Holy Communion. After the Liturgy we go home to prepare the meal. Back in the “old country,” twelve dishes are prepared, in honor of the Holy Apostles. The foods, prepared with oil, but without dairy products due to the fast, usually include fish, soup, stuffed cabbage, stewed prunes, mashed potatoes, honey, garlic, etc. The dining table is covered with a white linen cloth in memory of the swaddling clothes of Christ Child, and an extra place is set to receive a stranger, remembering that the Holy Family found no lodging in Bethlehem’s Inn.

In the center of the table is a large round loaf of bread, which symbolized Jesus as the Bread of Life. A tall candle is placed in the bread, as a symbol of the Star of Bethlehem. Straw is laid down on the floor and some of it also placed on the table or under the white tablecloth, symbolizing the fact that Jesus lay in a manger. The father greets everyone with the exclamation: “Christ is born!” And just as in Church, all answer “Glorify Him!” Wine is poured by the father, or the eldest, for a toast, recalling the act of our Lord Jesus at the Last Supper, and offered these words: “Grant, O God, that we may live to an even better Holy Night next year. May the Lord give good health to you, my dear wife, and to our children, to my good and bad neighbors, to my friends and enemies. May God bless all Christians here and abroad, and may He grant eternal memory and heaven to the departed. And above all, my Sweetest Jesus, born this day, bring peace, health and happiness!” All reply with the prayer: “Grant this, O Lord!” The mother sprinkles all the family members with Holy Water so that their minds and hearts would open to the meaning of the Birth of Christ. The father also takes Holy Water, sprinkling his livestock and household animals, and treating them to sugar or salt and plenty of feed. Many people wistfully feel that perhaps the animals speak at midnight on Christmas Eve. One would be fearful that they might complain to God if mistreated! Beware, those with livestock and pets.

After dipping her forefinger into honey in a bowl, the mother makes a sign of the cross on the foreheads of all present, including herself. The use of honey symbolizes her prayer that the lives of all present would be sweet without bitterness. After the Holy Supper, all then go to the Church for the evening Nativity Vigil, to hear the Psalms, the Troparion “Thy Nativity, O Christ our God…” the Kontakion “On this day the Virgin beareth…” the prophecy from Isaiah “God is with us” many other hymns, and of course, the Gospel of the birth of the Lord. Afterwards Carols are sung as all return home to prepare themselves for the Divine Liturgy on Christmas morning. Menu options: The traditional Holy Supper consists of twelve dishes in honor of the number of apostles. This is a fast day, so all dishes should be selected and prepared without meat, cheese, eggs or dairy products. In addition, small portions should be served in keeping with the character of fasting, this is not a feast. Feel free to build your own menu with additional appropriate dishes from your own family recipes.

“THE RENEWAL OF HUMANITY…the perfection of our humanity, according to the teaching of St. Irenaeus, must be brought to pass by the dispensation of the Incarnation of the Son of God, not by any kind of doctrine, not by the writing of any book. By taking flesh and becoming man, the Son of God, the Second Person of the Holy Trinity, made men partakers of the Divine nature. Assuming human nature in the unity of His Hypostasis, the Son of God by taking flesh became the New Adam, the Progenitor of the new humanity. “Beholding him that was in God’s image and likeness fallen through the transgression, Jesus bowed the heavens and came down, and without changing He took up His dwelling in a Virgin womb: that thereby He might fashion corrupt Adam anew.” St. Irenaeus says that the Son of the Most High became the Son of man in order to make man a son of God. In the new humanity, built upon the foundation of the Incarnation of the Son of God, the unity of our human nature, broken by sin, is restored. Christ Himself named this new humanity the Church.”

(From “Holy Scripture and the Church,” by St. Hilarion Troitsky, in Orthodox Word, 2009.)

Right before the major services of Nativity, Theophany, and Good Friday, a service is done called the Royal Hours. The title originally referred to the fact that the emperor of Constantinople would always attend these services in preparation of the feast to come. They differ from normal hours in that there are added hymns and readings, and two of the prescribed psalms are replaced by psalms that are particular prophecies of the feast to follow.

In the ninth Royal Hour of both Nativity and Good Friday, there are particularly dramatic hymns that are repeated in other services of the feast. It is interesting to see how these hymns mirror each other, giving us something to contemplate and consider.

Upcoming events this month (Events are subject to change! see the online calendar for updates or the attached PDF for more info) 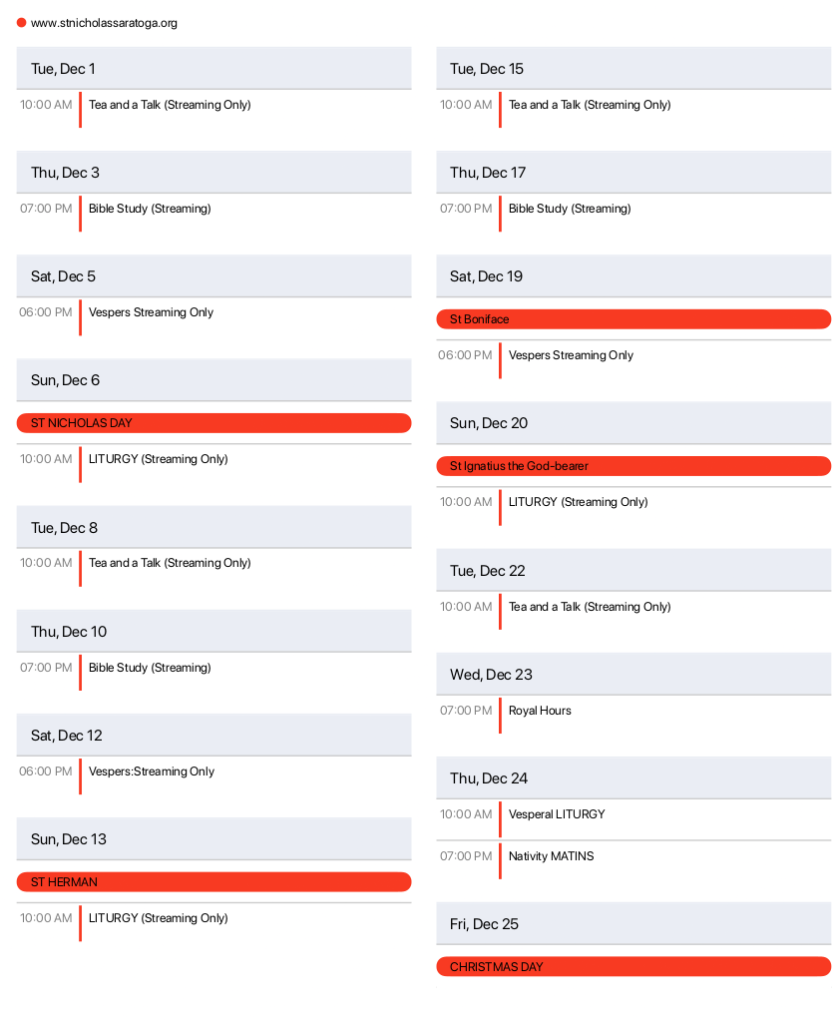