Focus on the Faith: On The Meeting of our Lord and Savior Jesus Christ in the Temple

Today the Church commemorates an important event in the earthly life of our Lord Jesus Christ (Luke 2:22-40). Forty days after His birth the God-Infant was taken to the Jerusalem Temple, the center of the nation’s religious life. According to the Law of Moses (Lev. 12:2-8), a woman who gave birth to a male child was forbidden to enter the Temple of God for forty days. At the end of this time the mother came to the Temple with the child, to offer a young lamb or pigeon to the Lord as a purification sacrifice. The Most Holy Virgin, the Mother of God, had no need of purification, since she had given birth to the Source of purity and sanctity without defilement. However, she humbly fulfilled the requirements of the Law.

At this time the righteous Elder Simeon (February 3) was living in Jerusalem. It had been revealed to him that he would not die until he should behold the promised Messiah. By inspiration from above, Saint Simeon went to the Temple at the very moment when the Most Holy Theotokos and Saint Joseph had brought the Infant Jesus to fulfill the Law.

The God-Receiver Simeon took the divine Child in his arms, and giving thanks to God, he spoke the words repeated by the Church each evening at Vespers: “Lord, now lettest Thou Thy servant depart in peace, according to Thy word, for mine eyes have seen Thy salvation, which Thou hast prepared before the face of all people, a light to enlighten the Gentiles, and the glory of Thy people Israel” (Luke 2:29-32). Saint Simeon said to the Most Holy Virgin: “Behold, this child is set for the fall and rising again of many in Israel, and for a sign which shall be spoken against. Yea, a sword shall pierce through your own soul also, that the thoughts of many hearts may be revealed” (Luke 2:34-35).

At the Temple was the 84-year-old widow Anna the Prophetess, daughter of Phanuel (February 3), “who did not leave the temple, but served God with fasting and prayers night and day. She arrived just when Saint Simeon met the divine Child. She also gave thanks to the Lord and spoke of Him to all those who were looking for redemption in Jerusalem” (Luke 2:37-38). In the icon of the Feast she holds a scroll which reads: “This Child has established Heaven and earth.”

Before Christ was born, righteous men and women lived by faith in the promised Messiah, and awaited His coming. The Righteous Simeon and the Prophetess Anna, the last righteous people of the Old Testament, were deemed worthy to meet the Savior in the Temple.

Orthopraxis: Blessing Candles on The Feast of the Presentation or “Candlemas”

The custom of blessing candles on the Feast of the Presentation has roots in venerable antiquity. As recorded in The Chronicle of St. Theophanes, Emperor Justinian I had issued an order in 541 A.D. that on the Feast of the Presentation, a candle-light procession be held throughout the city to implore Divine Protection against pestilence and the numerous earthquakes that plagued the city. And in answer to this holy gesture, God caused the pestilence and the earthquakes to subside. This gave rise to having similar processions on other occasions when the common welfare of the people was in danger.

These solemn processions later developed into the Litiya services held in the churches. The faithful, however, continued to light candles in their homes as a means of Divine protection. This prompted the blessing of candles on the Feast of the Presentation which then were distributed to the faithful.

In homes, the blessed candles are lighted and placed before a holy icon in time of serious sickness or the threat of a storm to implore Divine protection, as the family is gathered in prayer. In some places, a candle blessed on the Feast of the Presentation is used when the Last Rites of the Church are administered to a member of the family. It can also be placed into the hand of the dying as the priest recites “The Prayers for the Departure of the Soul,” sending him to God as a light-bearer and a ” champion of Faith” (St. John Chrysostom, Hom. on Hebr., IV, 7).

When the righteous Simeon, who received Christ in his arms at the temple, saw the child, he knew immediately that this was the Redeemer promised by all of Israel’s prophecies, for the elder was inspired by the Holy Spirit (Luke 2:26-27). Being inspired, he himself uttered prophetic words which form the hymn sung or chanted at the end of every Vespers service: “Lord, now lettest Thou Thy servant depart in peace, according to Thy word; for mine eyes have seen Thy salvation which Thou hast prepared before the face of Thy people, a light to lighten the gentiles, and the glory of Thy people Israel” (Luke 2:29-32).

This particular feast is part of the great celebration that began forty days prior, with the Nativity of Christ (December 25). Eight days later (January 1) we remembered the Circumcision of Christ and then His Baptism (January 6). The commemoration of these events in our Lord’s earthly life basically form one feast, the feast of the Incarnation of God the Word. 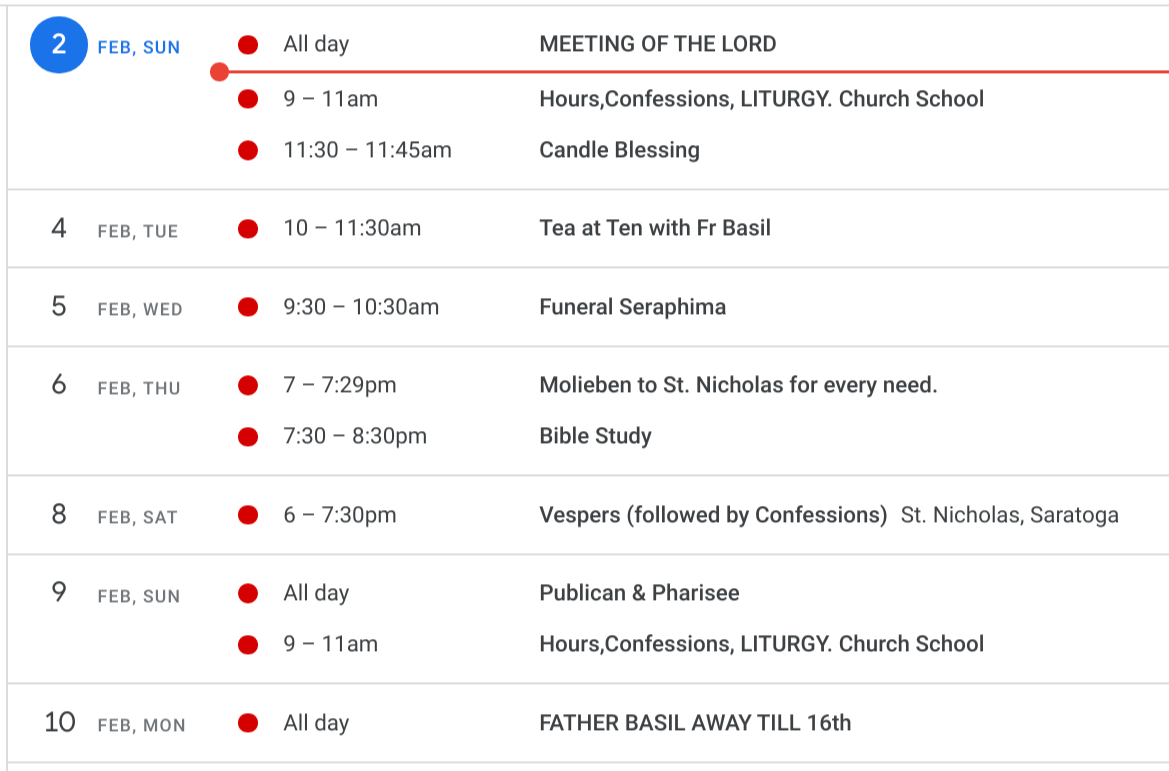