Focus on the Faith – The Meaning of the word “Orthodox”

The term Orthodox combines the adjective orthos, which means right, correct or true, and the noun doxa, which comes from the verb doxazo, “I hold an opinion,” or “I believe.” Hence “right belief,” or “true doctrine.” But in a deeper sense it also means “right worship,” since doxazo can also mean “I glorify.” It could be said that the term Orthodox was forged as a defense against heretical, or heterodox, teaching which persisted during the formative centuries of the Church. As then, so now, it signifies a framework of theological propositions worked into precise doctrinal formulations, a body of faith and a tradition, that has retained its absolute integrity in the face of the changes and innovations that have occurred within the heterodox “churches.”

The Tradition of Orthodoxy

In short, the Church’s claim to Orthodoxy derives from the conviction that it has received the faith of the Apostles, as contained in both the written and the oral Tradition, as interpreted by the Fathers in council, that is, in consensus, and as lived by the whole Church throughout the ages, fundamentally without change or interpolation.This conviction is nowhere better expressed than on the first Sunday in Lent, which is known as the “Sunday of the Triumph of Orthodoxy.” The first occasion for this observance was the final restoration of the icons in 843; but it is much more than a triumphant celebration commemorating that or any other particular “victory.” It is rather in the nature of what for a Protestant would be “Reformation Sunday” – except that it celebrates the exact opposite of reform, in that it reaffirms the whole ethos of the Church. Nor is it any longer, happily, merely an occasion when we repeat the ancient and terrible anathemas against the various heresiarchs of the past. Rather it is a reaffirmation of the faith, kept free of heresy and heterodox teachings throughout the great doctrinal controversies. Coming as it does at the start of Great Lent, we might well think of it as the observance of the Church’s self-awareness.

“Orthopraxia” means “the practice of living the Orthodox life.” One essential aspect of Orthopraxia is stewardship. Orthodox Christian stewardship is important because Jesus says that the giving of our time, talents and treasure is the path of blessedness (Acts 20: 35). Effectively living and practicing our faith in Jesus Christ through faithful stewardship demonstrates that we truly love God and offer all that we can to the glory of God. Stewardship means that we make an honest effort to focus on the call of Christ to commit ourselves to prayer, to work, and to give, so that the body of Christ, the Church, may live and meet Her mission. St. Paul writes, “It is required in stewards, that a person be found faithful.”(1 Cor.4-2). We must be willing to meet the challenge to strengthen the sacred work of our parish and of the Orthodox Church in America generally.
We support the Church, not because it is a responsibility, but a privilege. True commitment to your Church begins when we give sacrificially. It is “meet and right” that our Orthodox Christian offering be equitable and fair to the Church. A member of the Orthodox Church is one who is baptized and chrismated into the Faith. Membership, however, does not end following our participation in the holy Mysteries of the Church. To be a faithful parishioner, a steward, means that we fulfill the vow made at our baptism to pledge ourselves to Christ, as our King and God!

From the Lives of the Saints

This modern-day Church Father was born in Chernavsk in central Russia. The son of a priest, he entered seminary at a young age, then completed the four-year course in theology at the Academy of Kiev. Though he distinguished himself as a student, his heart turned increasingly toward the monastic life, and he was tonsured a monk and ordained a priest upon completion of his studies. During his time at the Academy he often visited the Lavra of the Caves, and there became a spiritual child of Father Parthenius (March 25).

His desire for monastic life was not fulfilled immediately, for the Church felt need of his intellectual gifts. He served as a professor at the Theological Academy in St Petersburg, then worked for seven years in the Russian Mission to the Near East, mostly in Palestine. During this time he gained a perfect mastery of Greek and studied the works of the Church Fathers in the original languages. Returning to Russia, he was soon consecrated a bishop; but after seven years of episcopal service, he at last achieved his heart’s desire, resigning as bishop and retiring to a small monastery at Yvschen, where he spent the rest of his days.After taking full part in the liturgical and communal life of the monastery for several years, he took up the life of a recluse in 1872. He lived in two small rooms, subsisting almost entirely on bread and tea, visited only by his confessor and the abbot of the monastery. He celebrated the Divine Liturgy every day in his cell. All of his time not taken up by inner prayer was devoted to translating the works of the Fathers into Russian and, increasingly, to writings of his own. Most importantly, he prepared a Russian-language edition of the Philokalia which had a deep impact upon Russian spiritual life. Though he received no visitors, St Theophan entered into correspondence with many earnest Christians who sought his counsel, and so in time became the spiritual father of many believers throughout Russia. He reposed in peace in 1894.

In addition to the Philokalia, St Theophan produced (among other works): a Spiritual Psalter of selections from St Ephraim the Syrian; The Path to Salvation, an exposition of Orthodox Spirituality written in clear, plain language for those living in the world; collections of his letters to spiritual children; and Unseen Warfare, a treatise on prayer and the ascetical life. This last has an unusual history. In its original form it was written by Lorenzo Scupoli, an Italian Roman Catholic priest. St Nikodemos of the Holy Mountain, recognizing the book’s merit, produced a Greek edition in which he corrected various deviations from Orthodoxy in the original. St Theophan in turn revised the Greek edition extensively, removing some material and adding passages of his own; so that the Italian, Greek and Russian versions are in fact three substantially different books. Many of St Theophan’s works (including Unseen Warfare) are available in good English translations. They are almost unique in presenting the undiluted hesychastic spirituality of the Orthodox Church in plain, straightforward language accessible to most people.

She was the daughter of a wealthy Roman consul. She became a deaconess in Rome, and was seized as a Christian during the reign of Alexander Severus. Before the tribunal she fearlessly confessed Christ and, when she was taken to the temple in an effort to force her to make sacrifice, she cast down the idols by the power of her prayer. At this, the soldiers seized her and subjected her to many indignities and tortures, finally throwing her into a raging furnace. When this did not harm her, she was thrown to the wild beasts, but they refused to harm her. At last she was beheaded and thus gained her crown.

They were disciples of Saint Andrew the Apostle, the first missionary to the lands north of the Black Sea. They witnessed to Christ around the Danube River and converted many to the Faith. They were arrested and condemned, and died immersed to their necks in icy water.

In the Prologue, St Nikolai Velimirovich describes them as the “first Slavic martyrs mentioned in history.” In ancient martyrologies they are referred to as Scythians, a term applied to the peoples living around the Black Sea in the early Christian era. It is doubtful that they were members of the Slavic people as we understand them today, though it seems that they were the first martyrs in the lands that are now inhabited by the Slavic people.

The St. Theophan the Recluse and St. Ignaty Brianchaninov Study Group resumes on January 10th. This is an online web meeting on Tuesday evening at 7:30PM, with a chat room for extra discussion. Contact Reader John using the contact form on the website (webmaster) if you would like to join in.

Reserve your spot for the Burns Supper Now! 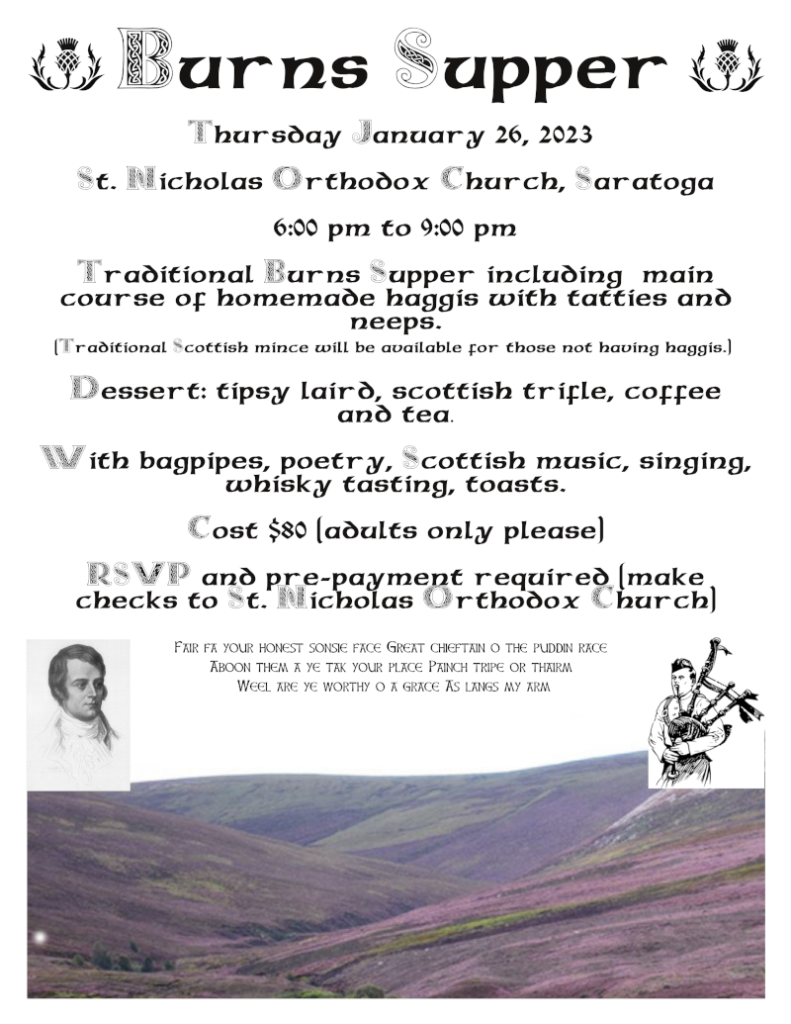 Upcoming events this month are in the online calendar, which you can subscribe to on your phone or tablet. Use the print button on the calendar to print a copy.

Click below to print a copy of this newsletter: