Focus on the Faith: On the Ascension of Christ

by the late Protopresbyter Thomas Hopko

Jesus did not live with His disciples after His resurrection as He had before His death. Filled with the glory of His divinity, He appeared at different times and places to His people, assuring them that it was He, truly alive in His risen and glorified body.

To them He presented Himself alive after His passion by many proofs, appearing to them during forty days, and speaking of the Kingdom of God (Acts 1.3).

On the fortieth day after His passover, Jesus ascended into heaven to be glorified on the right hand of God (Acts 1.9–11; Mk 16.19; Lk 24.51). The ascension of Christ is His final physical departure from this world after the resurrection. It is the formal completion of His mission in this world as the Messianic Saviour. It is His glorious return to the Father Who had sent Him into the world to accomplish the work that He had given him to do (Jn 17.4–5).

. . . and lifting His hands He blessed them. While blessing them, He parted from them and was carried up into heaven. And they returned to Jerusalem with great joy (Lk 24.51–52).

The Church’s celebration of the ascension, as all such festal celebrations, is not merely the remembrance of an event in Christ’s life. Indeed, the ascension itself is not to be understood as though it were simply the supernatural event of a man floating up and away into the skies. The holy scripture stresses Christ’s physical departure and His glorification with God the Father, together with the great joy which His disciples had as they received the promise of the Holy Spirit Who was to come to assure the Lord’s presence with them, enabling them to be His witnesses to the ends of earth (Lk 24.48–53; Acts 1.8–11; Mt 28.20; Mk 16.16–14).

In the Church the believers in Christ celebrate these very same realities with the conviction that it is for them and for all men that Christ’s departure from this world has taken place. The Lord leaves in order to be glorified with God the Father and to glorify us with himself. He goes in order to “prepare a place” for and to take us also into the blessedness of God’s presence. He goes to open the way for all flesh into the “heavenly sanctuary . . . the Holy Place not made by hands” (see Hebrews 8–10). He goes in order send the Holy Spirit, Who proceeds from the Father to bear witness to Him and His gospel in the world, making Him powerfully present in the lives of disciples.

The liturgical hymns of the feast of the Ascension sing of all of these things. The antiphonal verses of the Divine Liturgy are taken from Psalms 47, 48, and 49. The troparion of the feast which is sung at the small entrance is also used as the post-communion hymn.

Thou hast ascended in glory O Christ our God, granting joy to Thy disciples by the promise of the Holy Spirit. Through the blessing they were assured that Thou art the Son of God, the Redeemer of the world! (Troparion).

When Thou didst fulfill the dispensation for our sake, and didst unite earth to heaven, Thou didst ascend in glory, O Christ our God, not being parted from those who love Thee, but remaining with them and crying: I am with you and no one will be against you! (Kontakion).

Orthopraxis: What is PRAXIS?

“Praxis” means the traditional use of knowledge or skills, distinct from theoretical knowledge. Works as opposed to faith, or rather, the practical actions required by faith.

Union with God, to which Christians hold that Jesus Christ invited man, requires not just faith, but correct practice of faith. This is found in Holy Scripture in the following passages:(1 Cor 11:2, 2 Thes 2:15) and the Church Fathers, and is linked with the term praxis in Orthodox theology. In the context of Orthodoxy, praxis is mentioned opposite theology, in the sense of theory and practice, and is a word that means things, universally, all that Orthodox do. Praxis is living Orthodoxy.

Praxis is most strongly associated with worship. “Orthopraxis” is said to mean “right practice,” as “orthodoxy” means “right glory” or “right worship.” Only correct (or proper) practice, particularly right worship, will give the correct glory to God, which is one of the primary purposes of liturgy, the work of the people. Some Orthodox sources maintain that, in the West, Christianity has for the most part been reduced “to intellectual, ethical or social categories,” whereas right worship is fundamentally important in our relationship to God, forming the faithful into the Body of Christ and providing the path to “true religious education.” A “symbiosis of worship and work” is considered to be inherent in Orthodox praxis.

Fasting, another key part of the practice of the Christian faith, is mentioned as part of Orthodox praxis in connection with the Sermon on the Mount (Mt 6)and in comparison with the history and commemorations of Lenten fasts.

From the Fathers: Saint Nicholas the Merciful

When we commemorate whole groups of Saints, we usually mention the great hierarchs among them first, and we have become used to the three great universal hierarchs and teachers—Basil the Great, Gregory the Theologian, and John Chrysostom—always being at the head of the hierarchical assembly. They belong there, because each of them contributed precious gifts [e.g. their writings] to the Church’s theological and moral treasury. So the Church honors them in particular and has established a feast for the three of them together, in addition to the solemn services for their individual feast days. But the feast of the great hierarch whom we commemorate today, the hierarch and wonderworker Nicholas, has a special place of its own.

He did not leave us as rich a spiritual heritage as these three great men, but we all know how greatly the Church reveres him. The Feasts of Saint Nicholas are so splendid that they even remind us of the 12 Great Feasts. Why is that so? Because he lived a life of virtue incarnate: an accessible, comprehensible virtue, close to every man and every heart, even the heart that rejects every other holy thing. That virtue is love; love and compassion.

The Russians like to call Saint Nicholas “Nikola the Merciful” because his miracles are as numerous as the stars of heaven. I would like to remind you of one touching miracle that shows his mercy. This did not happen once upon a time, long ago; it happened in our time, in the city of Harbin [China], where I lived for over 40 years. At the train station in Harbin there was a large icon of Saint Nicholas the Wonderworker, and it was especially venerated by all the travelers. Hundreds of candles were always burning in front of it. People departing by train and the people who came to see them off would light candles, and prayers were constantly going up to the great hierarch for his protection during trips. There was always a crowd in the station because the rail traffic was very heavy.

One day the people who happened to be there (they related this themselves, this is their own story; it was early spring, when the ice breaks up on the Sungari, on which Harbin is located) they saw a Chinese man rush in, soaked from head to toe. He ran up to the icon, threw himself down in front of it, and stretched out his arms to it, saying something in Chinese. The people who knew Chinese said he was thanking the saint for saving him from death.

Here’s what happened: for some reason he was in a terrible hurry to cross the river. But the river is wide, and the ice was flowing along it. He decided to take a chance. As he ran across the ice, jumping from one floe to another, he slipped, lost his balance, and fell under the ice. He was drowning, dying, when he remembered the wonderworking icon. His pagan countrymen revered it too, just as the Russian Orthodox did. As he was drowning, he cried out in despair, “Old man from the train station, help me!” He lost consciousness and went under completely; and he was about to perish … when, all of a sudden, he was on the riverbank, soaked but alive and unharmed! So he took off and ran—the train station was far away—and he rushed in to the icon and thanked the great hierarch for this evident and amazing miracle of his mercy and love.

The entire Far East, the entire land of China, has a great veneration for Saint Nicholas, you know. Once a Russian hunter had wandered far, far, into the taiga or steppe, and there he came upon a Chinese farmstead where he asked shelter. The friendly master and mistress of the house invited him in, and over their door he saw an icon of Saint Nicholas. He thought to himself, “What can these heathen be doing with it? What do they need it for?” And he wanted to take it. His host was offended and said, “Why do you want to take the Old Man away from us? He’s so kind, he helps us so much. We won’t give him up for anything!”

So not only the Orthodox Church but practically the entire human race honors this great hierarch. Whenever anyone is in trouble or has some need, he turns to Saint Nicholas. This great hierarch hears and fulfills each of the hundreds of petitions that fly to him in Heaven, as long as we ask with firm, strong faith. That’s why the Russian people love Saint Nicholas so much and constantly entreat him: “O Father and Hierarch Nicholas pray to God for us!” Amen.

Saint Nicholas Save us!

Choir Director’s Corner: Light a candle at church from home!

Did you know that you can now light a candle at St. Nicholas from home? You can! The link is now at the top of the menu of our website, or just go here:

You can also “light a candle” in your heart.  Here are two of my favorite short articles on the Jesus prayer.

Notes on the Jesus Prayer by Fr. Artemy Vladimirov

The Jesus Prayer by St. Theophan the Recluse

Upcoming events this month (Events are subject to change! see the online calendar for updates or the attached PDF for more info) 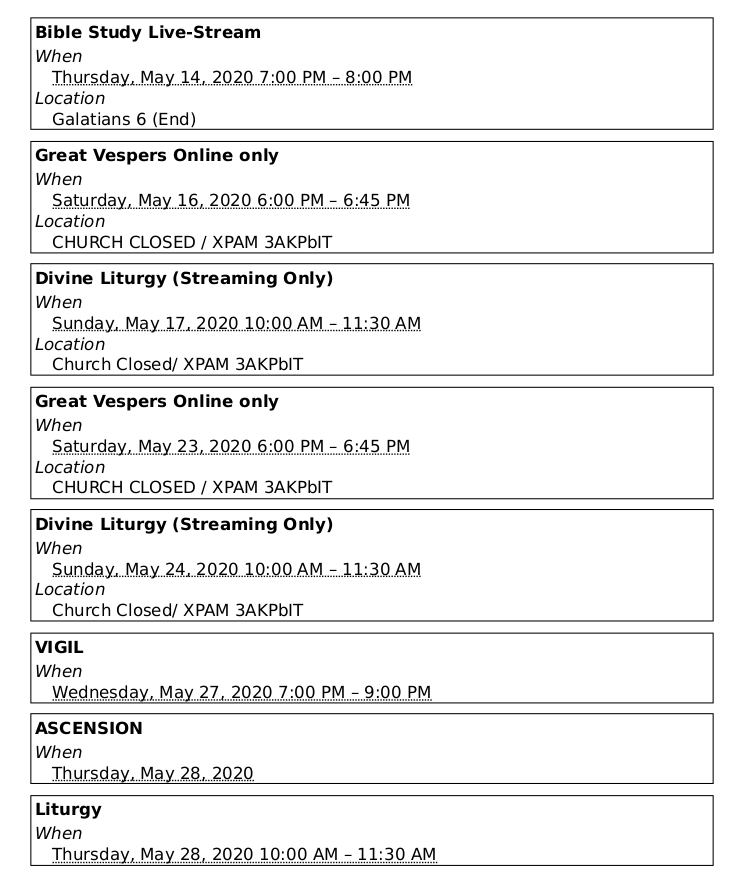