Focus on the Faith: What Orthodox Christians Believe About Angels

“Our angel will not retreat from us, unless we drive him away by our evil deeds. As the smoke drives bees away, and stench the doves, even so our stinking sin drives away from us the angel who protects our life.” – Saint Basil the Great

Saint John of Damascus tells us: “God is Himself the Maker and Creator of the angels; for He brought them out of nothing into being and created them after His own image. They are an incorporeal race, a sort of spirit or immaterial fire, even as the divine David says that ‘ His angels are spirits , and His ministers a flame of fire (Ps 103:6).

Angels were among the first part of God’s creation. In the Creed we say, “I believe in one God…Maker of heaven and earth, and of all things visible and invisible. Holy Scripture says, “When the stars were made, all My angels praised Me with a loud voice” (Job 38:7, LXX). The Apostle Paul tells us “By Him all things created that are in heaven, and that are on earth, visible and invisible, whether they be thrones, or dominions, or principalities, or powers” (Col 1:16). Heaven that was created in the very beginning according to Genesis (In the beginning God created the heaven and the earth) is generally understood by the Fathers to be an invisible heaven inhabited with powers on High. They believed that God created the angels long before He created the visible world.

Angels are active spirits with intelligence, will and knowledge. They serve God to carry out His will and glorify Him. The angels are bodiless and invisible to our physical eyes. They have no bodily needs or desires and passions, no cares about food, drink, clothes or shelter. Nor do they possess the impulse and cravings for procreation. They neither marry nor are given in marriage (Matt. 22:30). They have no worries about the future either, and no fear of death. For, though God created them before man, they are neither aged nor aging, but unchangingly youthful, beautiful and strong. They have no anxiety about their salvation and no struggle for immorality, being already immortal (Luke 20:36). Unlike men, they are not faltering between good and evil, being already good and holy as when God created them.

Peter informs us that in their might and power they surpass all earthly governments and authorities (II Peter 2:10-11). But as created beings they have limitations. They do not know the depths of the essence of God (I Cor 2:11). They do not know the future that only God knows (Mark 13:32). They do not fully understand the mystery of the Redemption yet they wish to (I Peter 1:12). They don’t know human thoughts (III Kings 8:39). And thy cannot by themselves perform miracles without the will of God (Ps 71:19).

“An angel, then, is an intelligent essence, in perpetual motion, with free will, incorporeal, ministering to God, having obtained by grace an immortal nature. The Creator alone knows the form and limitation of the angelic essence; but all that we can understand is that it is incorporeal and immaterial. For all that is compared with God, Who alone is incomparable, we find to be dense and material. For in reality only the Deity is immaterial and incorporeal.” Saint John of Damascus. (See the whole article at: http://stgeorgegreenville.org/our-faith/angels/)

Orthopraxis: The Tradition of the Christmas Tree

THE MEANING OF THE CHRISTMAS TREE

I first learned this familiar song as a child, but entirely in German. I learned it from my neighbors, who were German immigrants, and have loved all things connected with the German celebration of Christmas ever since.

I love the tradition of the Christmas tree. We have one every year. I hope that you do too. Some people don’t put up a Christmas tree. Some mistakenly think that this custom is derived from paganism, and is inappropriate for Christians. Others believe that it was something invented by Martin Luther, the German Protestant Reformer in the 16th century, and therefore not an Orthodox tradition. Still others imagine that a Christmas tree only makes sense if you have children and if you have presents to place beneath it. But all of these miss the mark. Do you know the origins of the Christmas tree? I’m sure many of you do. But in case you have forgotten, let me share with you a tale from the eighth century, a tale from the church’s oral tradition, about St. Boniface, the martyr, born in Britain, who became the Apostle to the Germans.

According to tradition, St Boniface was responsible the very first Christmas tree. In the early part of the 8th century, St Boniface was sent into Germany as a missionary, with an aim of converting the pagans to Christianity. He worked tirelessly in the country preaching the Gospel and building churches to replace the many pagan shrines and groves. He was eventually named Archbishop of Mainz, and restored the diocese of Bavaria as well.

It was on a trip down to Bavaria, around the time of Winter Solstice, that he came across a group of pagans worshipping an ancient oak tree. Horrified by what he saw as blasphemy, the zealot for Christ, St Boniface, grabbed the nearest axe and hacked down the tree. As he did this he called on the pagans to witness the power of his God over theirs. The pagans were furious, but rather than rushing the saint to kill him, they waited to see what would happen. And behold, out of the stump of the ancient oak, there sprang up immediately and miraculously, a young evergreen fir tree symbolizing the everlasting Son of God. The pagans fell on their faces and embraced the faith of St Boniface! The evergreen nature of the tree stands for eternal life. This idea is confirmed by the use of such a tree in medieval “Paradise Plays.” According to Fr. Francis Weiser, in his “Christmas Book,” the origin of Christmas trees in the home “goes back to the medieval German mystery plays. One of the most popular of these ‘mysteries’ was the Paradise Play, representing the creation of man, the sin of Adam and Eve and their expulsion from Paradise. It usually closed with the consoling promise of the coming Savior and with a reference to His incarnation. This made the Paradise Play a favorite pageant for Advent, and its closing scenes used to lead directly into the story of Bethlehem.

These plays were performed either in the open, or the large squares in front of churches, or inside the house of God. The garden of Eden was indicated by a fir tree hung with apples; it represented..the ‘Tree of Life’…which stood in the center of Paradise. After the suppression of the mystery plays in churches, by the Protestants, the Paradise tree, the only symbolic object of the plays, found its way into the homes of the faithful, especially since many plays had interpreted it as a symbol of the coming Savior.”

From the Fathers: On the Holy Angels

“Let us think of the whole host of angels, how they stand by and serve His will, for Scriptures say: “Ten thousand times ten thousand were doing service to Him, and they cried out: Holy, holy, holy, Lord of Sabaoth; the whole of creation is full of His glory.” Then let us gather together in awareness of our concord, as with one mouth we shout earnestly to Him that we may become sharers in his great and glorious promises.”
(Saint Clement of Rome, “Epistle to the Corinthians,” XXXIV)

“It appears, indeed, that even before this world an order of things existed of which our mind can form an idea… The birth of the world was preceded by a condition of things suitable for the exercise of supernatural powers, outstripping the limits of time, eternal and infinite. The Creator and Demiurge of the universe perfected His works in it, spiritual light for the happiness of all who love the Lord, intellectual and invisible natures, all the orderly arrangement of pure intelligences who are beyond the reach of our mind and of whom we cannot even discover the names. They fill the essence of this invisible world, as Paul teaches us. “For by him were all things created that are in heaven, and that are in earth, visible and invisible whether they be thrones or dominions or principalities or powers” or virtues or hosts of angels or the dignities of archangels.”

“Whenever we enter the church and draw near to the heavenly mysteries, we ought to approach with all humility and fear, both because of the presence of the angelic powers and out of the reverence due to the sacred oblation; for as the Angels are said to have stood by the Lord’s body when it lay in the tomb, so we must believe that they are present in the celebration of the Mysteries of His most sacred Body at the time of consecration.” 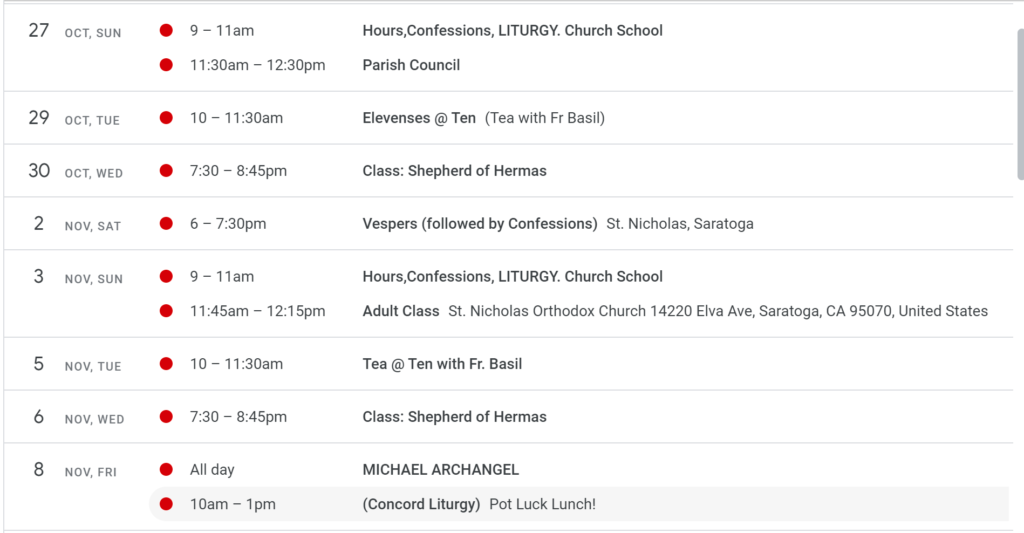